Posted by anniethenanny on Jul 26, 2015 in Uncategorized | No Comments 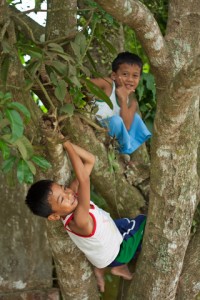 Asking the question, is risk taking good for kids is critical to changing our society’s paranoid perspective on risk.  The bottom line is if there’s something in our society that we need to change quickly for the health of our children, it’s our perception of children and risk.   I don’t know about you but I love dirty kids because if kids are dirty, it generally means they’ve had a ton of fun.  They’ve probably been digging up to their eyeballs in dirt like two little boys I saw on a walk yesterday, who were in their front yard, scooping up cupfuls of dirt and mixing it in bowls.  Not only was the crisp air refreshing, but it was also wonderful to see no hovering mom or dad.  Further on, I saw another couple of children around three, again in their front yard, playing with leaves like children have done for generations, gathering them up and throwing them over each other like confetti.  As someone who is involved in helping parents with their child’s behaviour, it was just a pleasure to watch and again mom or dad were conspicuous in their absence.

It was a good day but it was also an unusual day.  More often than not, kids are surrounded by moms and dads who simply can’t let go.  It doesn’t matter that risk taking is good for kids. It only seems to matter that nobody wants to expose them to it.  Now I understand that in our modern society things are seemingly more dangerous than ever.  There are speeding cars and weirdos and all sorts of potential hazards but many parents don’t recognize how hovering creates a child who is less, not more able to cope with the hazards of life.

Watch a baby and if you stay close and look busy with something else, you’ll discover something fascinating.  Babies actually have their own sense of safety.  At one point, teaching them how to get down a set of stairs is infinitely more worthwhile than continuing to use baby gates.  As soon as baby figures out how to get over the gate, they are going to be going up and down the stairs anyway.

If you do it right, children will develop a good sense of risk naturally

So can you remove risk altogether?  No, of course not, but what you are doing is allowing the child to develop their own sense of safety, in a way that children will do naturally if they are allowed.

I should add that I went camping last year on Vancouver Island and while I was there, a bunch of lovely hippies showed up in a big red van.  There was mom with her flowing robes and Birkenstocks (I have a pair too) and when she flung open the door, out tumbled a bunch of small grubby looking kids.  The oldest was about eight and the youngest, no more than about 16 months.

As she and the other grown ups, (about three of them) started setting up their base, I watched as they gathered all their things on a platform about 18 inches in height.  The platform was there as their ‘living area’ of sorts and had been provided by the campground as a base.  As they organized all their stuff, the youngest of the kids ran up and down the length of the platform as fast as her little legs could carry her.  It was about 12 foot in length.  She would run full tilt and then the moment the end appeared, she would stop abruptly and step down so very carefully.

It was fascinating to watch because as the toddler negotiated the step by herself, mom was busy sorting her stuff and other than a glance here and there, obviously wasn’t the slightest bit worried.  She’d taken in to account the height of the step, figured out that if her daughter fell she’d get a bump but likely nothing worse and let her go for it.  Great, but mom was also doing something else really important.  By letting her negotiate a minor danger by herself, she gave her little girl confidence in her own physical abilities.  She didn’t leave her on the highway by herself, or let her cross a busy road alone but she didn’t sweep all hazards out of her path either and this was a potential hazard that really was within her child’s ability to handle.

We are too risk adverse

Unfortunately, I have to say that the mom I watched that day is the exception rather than the rule.  We have become so risk adverse that it’s making our kids increasingly vulnerable to the curve balls life throws.  We seldom let them run to a neighbours house by themselves to play.  We hover in playgrounds and talk about safety, yet we refuse to see what safety really is, which is giving children the skills and experience to navigate a challenging world, one skill building on another.

We rarely let kids climb trees, build forts and get filthy, yet we need to.  We run them to soccer practice when they could walk.  We drive when they could learn to take the bus.  Yes, something could untoward could happen.  There is always that risk but then something could happen to me when I step outside. I could get run over by a garbage truck the moment I leave my front door.  The bottom line is that risk is not a dirty word.  I’d rather live life and participate fully in its risks and rewards than stand at it’s edges. Wouldn’t you?

Our Skype session was very successful and easy!

Continue Reading
Sarah (Calgary)
Without knowing her, I trusted her immediately...