What To Do With A Child That Hits

Posted by anniethenanny on Aug 5, 2015 in Articles, general behaviour, Hitting | No Comments 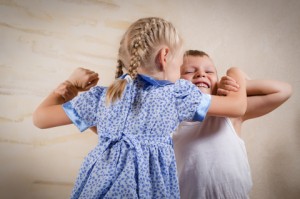 If you’re wondering what to do with a child that hits, I just read an article in a parenting magazine that quotes a couple of experts talking about hitting in a way that I think continues some of the sad misconceptions that parents have about children that hit.

The article in question was titled “How to Stop Your Child from Hitting” and noted that in every age group, it’s important to stay calm and that you should pay attention to your little “slugger” in a way that is not rejective or isolating. They further suggest that you should demonstrate calm touches, etc. While I always like the idea of mentoring good behaviour, what I find most interesting in this article is the total repudiation of anything that remotely mentions isolating your child when they behave badly.

Watch children in a natural environment

If you actually watch children in a natural environment, and I mean a really natural environment, like an African village, one of the first things you’ll see is that children will often play together in large and diverse age groups. The older children will initiate the activity, and the younger ones will play on the periphery at their level of play. If one of them does something repeatedly that the other kids don’t like, then they are isolated by the other children. Whether those other children react by hitting back is debatable, but what they’ll do is simply exclude the aggressive child from their play. From that natural response, the child learns something very valuable, which is that if you hit, you’ll likely spend a lot of time alone. It’s social isolation at its most basic, and it’s extraordinarily effective.

If you give attention to a particular behaviour, you will get more of it

But how confusing it is for parents when they are told, as in the above article, that intervening and trying to change an aggressive child’s behaviour by “teaching” is more appropriate and that children should never feel excluded. All of that leads me to another question that’s worth asking: why do people change their behaviour?  Do we change because of the information presented to us, or do we change for another reason?

One of my favourite scientists, Chris Martenson, made a speech the other day about sharing information, and he mentioned the psychology of change and the percentage of a population that changes because of information presented to them. It turns out that people who change because of insight account for about half of the population. Half of the people have a lightbulb moment and decide to change their ways. The other 99.5% change because of pain. You know the kind of thing. Have a heart attack? Stop eating hamburgers loaded with cheese. Don’t look okay in a swimsuit? Diet etc.  That’s how human beings change their behaviour, through pain. It doesn’t have to be a nasty pain that lasts forever, but it does have to be enough of a wake-up call to make an impression.

If you want to know what to do with a child that hits, look at human behaviour through a human lens

So now let’s look at children’s behaviour through that “natural” lens again. Why would we think children would act any different from adults? Children are little people, but they are still people with all the associated human traits. If you’ve done something wrong as an adult, you understand the pain, and you’re probably aware of the consequences enough that you’re unlikely to do whatever it was again. A child is not and is still learning, which is why we must be gentler and refrain from referring to one child hitting another on the head as an assault. It’s why we don’t notify the police or grab their hands behind their back and wait for the handcuffs.

Instead, what we need to do is understand human behaviour and act rationally. Children love attention, and negative attention is just as good as the positive variety. All it really boils down to is that you behave well and you receive my attention, or you are a pain in the rear end, and neither I nor anyone else will want to have anything to do with you. That is a life lesson, and you can learn it at two or twenty, but twenty comes with a whole lot more trouble.

If your child hits, they’re trying to tell you something

If hitting has become a problem for your child and it’s happening more than very occasionally, then your child is trying to tell you something. They are mad, and they are expressing themselves in the only way children know how: through their behaviour. No, they are not psychologically evaluating their feelings; they are just reacting. Hitting you or other people is your wake-up call, and it’s just as painful to any parent as it is to the child. No parent wants to feel that their child is the aggressive one or the one with an issue. What you need to understand as the parent is: what are they mad about? They are trying to get your attention. The leadership equation has gone off the rails somewhere, and if that is happening, it’s wise to listen. After all, learning this when your child is two means you can do something about it. When they’re sixteen, not so much.  Visit my behaviour intervention page for assistance in getting your child to stop hitting.