These parents need to get their act together! 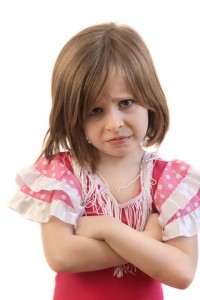 Our niece Kaitlyn is about 3 1/2 years old and her parents need to get their act together. She runs the show. Kaitlyn tells her mom and dad what to do.  She wants nothing to do with anyone unless she can be the boss; she does not respond to questions from adults (gets no input in this regard from her parents) and pointedly ignores anyone who has authority (and is not encouraged to do otherwise by her parents). Kaitlyn throws a fit, whines, cries, or otherwise manipulates her parents and everyone else who can put up with it.
Other family members have retreated and often choose not to attend gatherings, since Kaitlyn’s behaviour is so offensive. Kaitlyn’s parents are very passive. They either think she is their darling princess or they don’t know how to handle the behaviour of their daughter (or, to give them credit, a combination of both), so they do nothing. Yes, nothing. If she acts up, they assure her “it’s okay” in a quiet voice. (It is NOT okay!!) At this point, we can hardly stand to have the family over. It is awkward at the table, awkward playing, and awkward in every situation since Kaitlyn must have her way and control everything. Her interests (and disinterests) rule. Obviously, things are very out of order, and the parents need to step up and be parents. My question is, how I can be a help or assist the parents to get help?

You have a difficult dilemma, and it must be very frustrating to be in a position where you can see that these parents need to get their parenting act together but not be able to do much about it.  I think the best way to look at this is as a decision tree. Your first choice is to do nothing and hope that the parents are driven nutty enough to do something about her behaviour themselves. That, as you suggest, is unlikely.

Choice number two is not to invite them over. This presents a social problem because they are likely to start wondering why. If they confront you, you may be presented with a brief opportunity to say how you feel. You could suggest that Kaitlyn does better at home, as it seems as if she isn’t comfortable with social situations just yet. Even that would be pretty direct. When invited over, you could politely decline under the guise of another commitment.

The third option to help these parents to get their parenting act together is to intervene.

There are four choices under intervention.

a) You can do it directly by sitting down with the parents and telling them why they have an issue, being as gentle as you can. At that point, you could hand them some ideas for resources that might help them solve the problem.

b) You could try the soft approach and suggest that it won’t be too long before Kaitlyn will be going to kindergarten. You could talk about all the expectations that the school will have with regards to Kaitlyn’s social development and point out how embarrassing and stressful it can be for a parent to be on the receiving end of behaviour-related calls from teachers. If you want to build camaraderie, you could say you went through a similar period as a parent and had a hard time getting your own act together when one or other of your children were Kaitlyn’s age (even though that wasn’t the case). You could add that you’re so happy you did something about it at that point because you realized that if you hadn’t, things would have been much more difficult later on.

c) You could use an intermediary to spread the message on your behalf. Perhaps Kaitlyn’s grandmother might be of help. You ideally want someone who has a particularly close relationship with Kaitlyn’s mother or father and may be in a better position to break the news. In a private phone call to whoever that might be, you could say you are genuinely concerned about Kaitlyn’s behaviour because you believe it is affecting her and her parents’ relationship with the rest of the family. In that way, you might also be able to pass them a list of resources that might help them get their parenting act together.

d) The divide and conquer strategy is your final option for assisting these parents in getting their parenting act together.  Of the two, and I’m talking in generalities here, mothers are generally more defensive than dads. You and/or your husband could take your brother or brother-in-law aside and have a chat. How best to do that I leave to your discretion, but it is an option. It might be easier for Dad to realize there is an issue and then, over time, help his wife come to terms with that as well.

Having said all the above, no matter what intervention you choose, you unfortunately run the risk of creating a family rift. I wish I could give you an easy out that solves the problem, but in a situation like this, every choice comes with a cost, either to your personal sanity or family relations, or, in the final analysis, to Kaitlyn herself.

Would you like personal help from Annie the Nanny?

Do you want to stop toddler meltdowns?