Five Tips For A Guilt-Free Summer With Kids

Posted by anniethenanny on Jun 22, 0201 in Uncategorized | No Comments 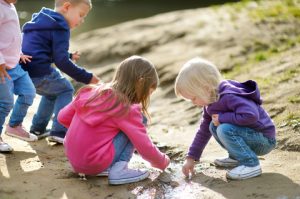 The kids are almost home and it’s often this time of year that parents contemplate what they’re going to do with them for the summer holidays.   So here are five tips for a guilt-free summer with kids.

First of all, something in my title of, ‘Five tips for a guilt-free summer with kids’ may strike you as odd.  Why guilt free?

Well, the prevailing ideology states that having to do something with our kids is our main summer job.  We have to keep our children happy because if they’re not being entertained, well, then what?  They might get in to stuff.

What stuff might they get in to?  That’s a good question.  It’s probably not the stuff you want them to get in to but does that mean that it’s something they shouldn’t get in to or is it just that keeping them away from those things makes a parent’s life easier?  Perhaps parents can’t stand the prospect of one more, “I’m bored!’

Taking them out is not the answer

If that’s the case, I can’t say I blame them, but let’s look at that one for a moment.  Many of the parents I visit notice something interesting.  They notice that if they take their children out somewhere they behave better.  So a lot of the homes I go in have parents that spend an awful lot of time ‘doing’ stuff.

That stuff is generally what keeps the kids happy, but does very little for the parents except turn them in to exhausted social directors who flop on the couch at the end of the night and hardly notice each other.

It’s also why we have a whole entertainment industry geared to kids, not only on the holidays when it would actually be nice for parents to spend some time with their kids, but all the other times when parents are persuaded that the way to make their kids happy is to keep them entertained 24/7.

Keeping them stimulated is definitely in and letting them get bored, well that’s got to be bad parenting, hasn’t it?

Allowing children to get bored is critical

Well, no.  Turns out being bored is important for the brain.  According to * Dr. Stuart Shanker’s who has just written a new book about self regulation, being bored is simply an expression of ‘feeling yucky,’ created by too much cortisol in the body, which makes the child feel stressed.

When parents see boredom they often rush to fix it but you don’t fix overstimulation with more stimulation.  You fix it by creating calm.  What creates calm?  Nature is good.  Being outside and digging with a stick is good.  Painting the deck with water with an old paintbrush is good.  Just playing works too.

So here are five tips for a guilt-free summer with kids.

* Self-Reg’  Dr. Stuart Shanker, written with Teresa Barker, Self-Reg: How to Help Your Child (and You) Break the Stress Cycle and Successfully Engage with Life. Published 2016 by Penguin Random House Canada.